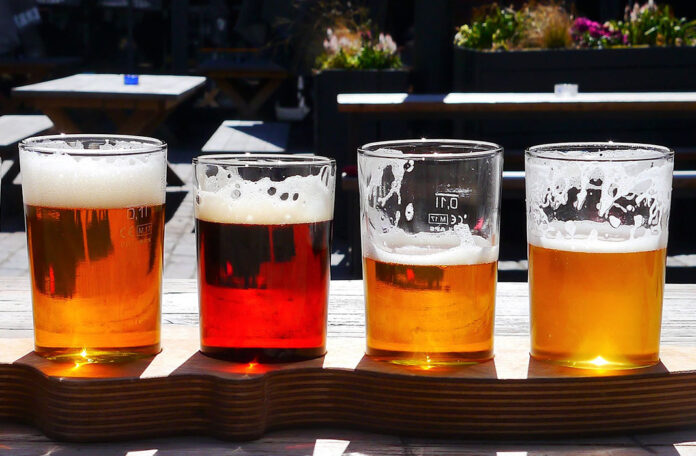 Those of you who are always on the look-out for food and drink recommendations will no doubt have heard about our guest contributor, Chris Eats.

His blog about Glasgow’s dining scene has gained huge popularity over the last few months and we’re delighted he took the time to write this feature about the city’s best craft beer joints for I Love Glasgow.

Chris, it’s over to you…

Those who follow my blog will know that I spend an inordinate amount of time in Glasgow, trying to find the best places to eat. You may have also noticed that in between meals I like to enjoy a drink or two. Sometimes that’s a few beers at home and other times it’s out and about in one of Glasgow’s many great bars.

Believe me when I say that no stone has been left unturned in researching this piece. Many hangovers have been suffered in the process and many days wasted recovering. But when you love what you do, then you suffer through the pain and soldier on.

Just like the food scene in Glasgow, the craft beer scene has exploded in recent years. There are so many great places to go that deciding where to start can sometimes be the hardest decision of the night. Let me take you through some of my favourites and hopefully make that decision a little easier the next time you fancy a few beers. 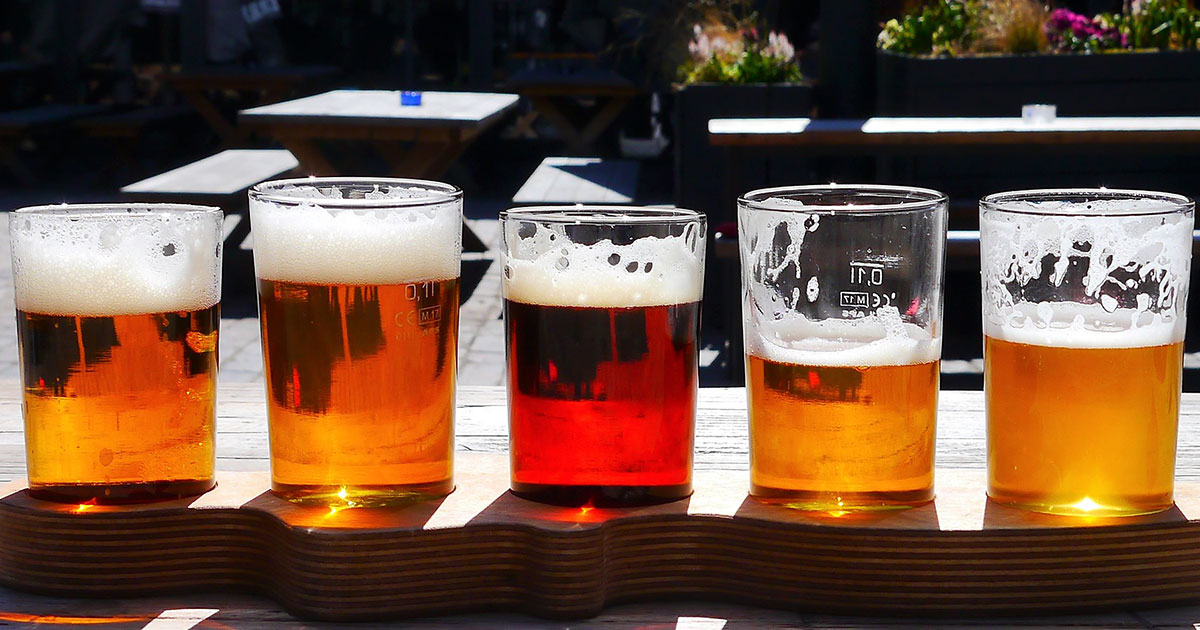 My favourite place to enjoy a beer in Glasgow is Grunting Growler in Finnieston.

After stumbling across a beer tasting room in London I decided to see if Glasgow had anything similar. I loved the idea of going in, having a few beers and then taking some home. That’s exactly what you get at Grunting Growler… and more!

With six rotating taps, there’s always something new to try and if you find one you really love then you can buy a growler, have it filled with your favourite beer and take it home. It’s pretty much everything I’ve ever wanted from a bar. They also do some great guided tasting events with breweries from all over the UK, which is a great way to learn about new beers.

I’ve also had the pleasure of chatting to Jehad who owns and runs Grunting Growler and as well as being passionate and knowledgeable about beer, he’s also one of the nicest guys you could meet. If you haven’t been here yet then do yourself a favour and add it to the list.

A close second for my favourite bar in Glasgow is DogHouse in Merchant City.

They do great food and being part of the BrewDog family means they’re always going to have great beers on offer. I’ve been a big fan of Punk IPA for many years and Jet Black Heart is certainly a new favourite of mine. DodHouse ticks all the boxes for the food and beer lovers out there.

As well as the extensive range of BrewDog beers on tap, there’s also a chance to enjoy limited edition collaboration beers and some terrific showcases from other breweries. For my birthday this year, I popped in and was lucky enough to sample the Crooked Stave showcase, sour beers from a Denver brewery that I doubt you’d get anywhere else in Glasgow.

If that wasn’t enough, they have beer fridges stocked with some terrific beers from other breweries and a bottle shop for when it’s time to go home and you want to have a couple more on the couch. You won’t go wanting here, I guarantee it.

Continuing with this whirlwind beer tour of Glasgow, next up is Redmond’s of Dennistoun.

This is my local and by far the best place in the east end to enjoy a beer. As well as having some excellent beers on permanent taps, Joker IPA being a favourite of mine, they also have four rotating taps showcasing some great local and UK breweries.

I’ve been finding myself in Redmond’s more and more recently and it’s not just because of the beer. They also have some great food on offer; the steamed bao buns are a must and make a perfect mid-session snack to keep you on the level.

It’s just a really cool bar with a great vibe to spend some time in. There’s usually some great old school tunes playing on the record player, and the friendly staff are always happy to talk through the drinks options with you.

It’s worth mentioning that the people behind Redmond’s recently opened Phillies of Shawlands in the southside and although I’ve yet to visit it’s definitely on my to-do list.

One bar in the southside I have had the pleasure of checking out recently was Koelschip Yard, which had an impressive selection of beers on offer.

Whether you’re looking for draft, cans or bottles they seem to have you covered at Koelschip Yard. Although I’ve only been the once so far, it’s safe to say it would take a few visits before you could exhaust the choices there.

Just across the road from Koelschip Yard is possibly my favourite bottle shop in Glasgow, the aptly name Wee Beer Shop.

It may be small but don’t let that fool you; the shelves are high and stocked with some great beers you won’t find anywhere else. This is the perfect place to stop by for a few beers for an evening at home.

As well as the usual cans and bottles, you’ll also find a growler filling station. Growlers are the way forward as far as I’m concerned. Being able to enjoy a nice cold pint in your home has revolutionised the way we can enjoy beer.

Each time I go in I like to have a chat with Niall (who owns and runs the Wee Beer Shop) about what new and rare beers they have in store. Some of the best beers I’ve tried over the last 6 months have been courtesy of his suggestions. He also does great bespoke gift sets, just let him know what the recipient likes and he’ll sort you out with the perfect gift for the beer lover in your life.

If you want a massive selection of beers then Shilling Brewing Co. is a great bar.

Right in the city centre, they have an ever-changing line up of beers as well as some from their in-house brewery. It doesn’t get much fresher than that!

With spring and summer (hopefully) just around the corner, I’d be remiss if I didn’t give a mention to Inn Deep. A popular craft beer hub that sits on the banks of the River Kelvin in the west end. Whiling the day away sitting or standing by the water and watching the world pass by is a great way to spend a sunny day in Glasgow.

Another west end favourite of mine is Crossing the Rubicon.

I’ve been a regular in here for food over recent months but they also do some great beers on tap, as well as a wide and varied range of cans and bottles. They also do takeaway and it’s not uncommon for me to stop by on the way home from work on a Friday to pick up some beers for the weekend.

Last but certainly not least is another east end favourite of mine, Drygate Brewery.

Located on Duke Street, Drygate is another place to enjoy some fresher than fresh beer straight from the source so to speak. As well as the usual line-up of Drygate beers (which are very good) you’ll find some guest brews and their taster flights are my favourite way to work my way through the menu.

So there you have it, Glasgow’s best craft beer bars, bottle shops and a tasting room that you simply must try. When I’m not out eating or cooking up a storm in the kitchen, I’ll most likely be in one of these places enjoying a nice cold beer. Let me know if you think I missed anywhere out or if you have any recommendations then let me know in the comments below.

Even if you’re in a hurry, you should still be able to enjoy a mouthwatering meal on the go. Chips and gravy out of the City Bakeries used to be the most elite lunch going but Glasgow’s takeaway offering has come a long way since then.
Read more
Food & Drink

Whether you have a favourite treat that you always seek out or will happily sink your sweet tooth into anything that’s a little bit naughty, these sugar-high hits will give you the fix that you’re chasing.
Read more
Food & Drink

Forget flights, passport woes, and big airport queues - Glasgow’s best beer garden is getting a transformation this summer and it’s the only place you need to be… introducing the Brel Beach Club!
Read more
Food & Drink

Sometimes you have to venture off of the beaten...
Read more
Best of Glasgow

I Love Glasgow is an independent digital lifestyle and cultural brand helping you to discover the best of our city on social and on the street.

Even if you’re in a hurry, you should still be able to enjoy a mouthwatering meal on the go. Chips and gravy out of the City Bakeries used to be the most elite lunch going but Glasgow’s takeaway offering has come a long way since then.

Whether you have a favourite treat that you always seek out or will happily sink your sweet tooth into anything that’s a little bit naughty, these sugar-high hits will give you the fix that you’re chasing.

Forget flights, passport woes, and big airport queues - Glasgow’s best beer garden is getting a transformation this summer and it’s the only place you need to be… introducing the Brel Beach Club!