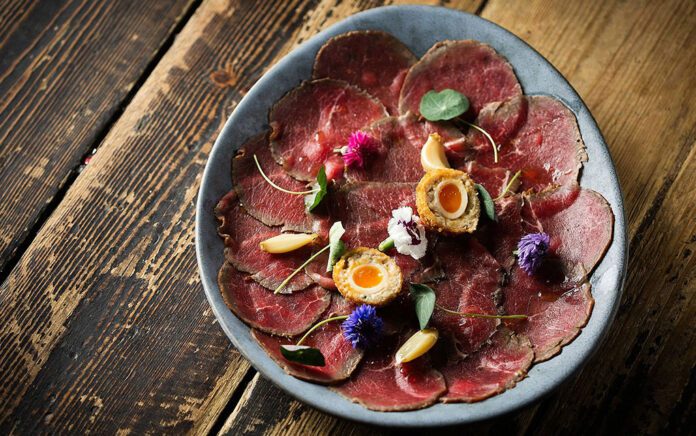 Glasgow is the home of Scottish food and drink, and it’s time for the whole world to know about it.

We have a small army of chefs who are breaking boundaries, setting the urban heather alight and smashing lazy stereotypes out of the park. With Scotland’s natural larder at their fingertips, these chefs are consistently producing exceptional plates of food.

Here’s our list of Glasgow’s 25 Best Restaurants that have been in business for 5 years or more.

Winner of the UK Seafood Restaurant of the Year, holders of two AA Rosettes for 19 years and listed in the Michelin Guide. When it comes to sustainable seafood dishes of the highest quality, then look no further than Gamba. A gem in Glasgow’s culinary crown, still going strong after two decades!

Let us – for a brief moment – give thanks to Italy, a nation that gifted the world Leonardo Da Vinci, pizza, the Vespa and most importantly, Coia’s Cafe. A legendary east end restaurant that will outlast all of us, and is regularly as stuffed as their epic Nutella cannoli.

Sure, Cail Bruich have three AA Rosettes and various other awards to their name but we’re sure being listed in The Glasgow Restaurant Bible will mean just as much to them. They’re a leading light in the city, championing modern Scottish cuisine and doing so with some aplomb.

Behold, a restaurant that lives up to its name! It’s all about meat at The Butchershop and more specifically, their now legendary steaks. This beefy obsession has seen the most infamous of their dry-aged cuts, The Tomahawk, achieve cult status among Glasgow’s steak connoisseurs.

Long before Finnieston became Glasgow’s hipster hotspot – Crabshakk set up shop and had people from all over the city venturing to this once ignored stretch of Argyll Street. Quality seafood, served up in the coolest part of town.

A Glasgow icon that encapsulates imaginative fine dining in truly unique surroundings. Their indoor courtyard, lined with sparking fairy lights and greenery that leads up to the vaulted glass roof, offers a magical and quirky dining space unlike any other in the city.

With a monkier that would give your gran heart-failure, Fanny Trollopes is hard to ignore. Vitally, their food is considerably more alluring than the name. Quietly going about their business on Glasgow’s hippest stretch of real estate, Fanny T’s is a small restaurant full of big flavours.

1935, the year Swing music had people Lindy Hoppin’, the first canned beer was sold in the USA, Persia was renamed Iran, a chap named Elvis Aron Presley was born and a certain restaurant in Glasgow took their first delivery of fresh fish – The Rogano had arrived. 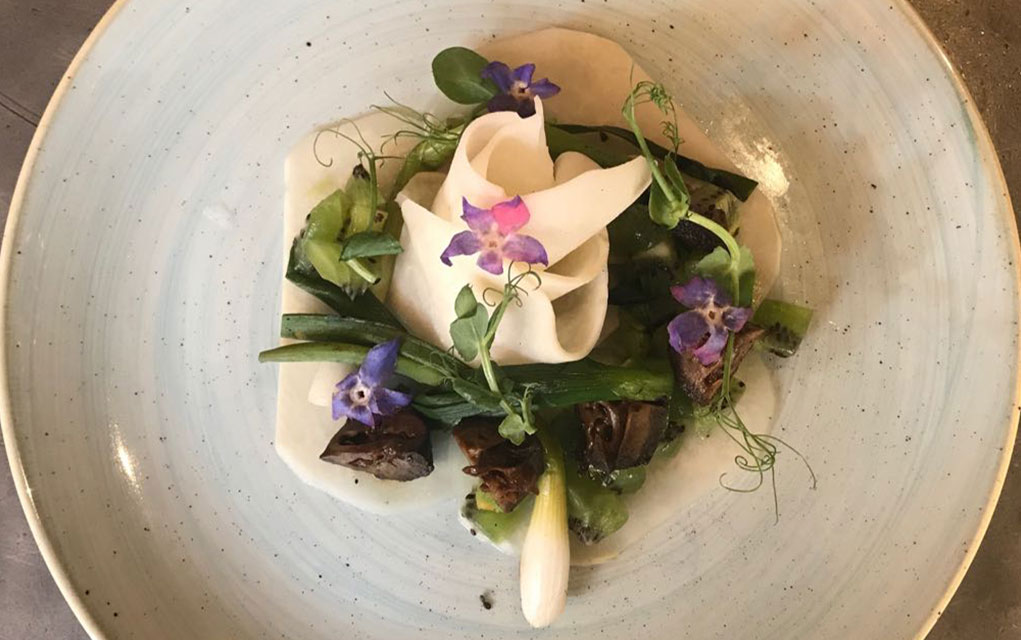 Holders of the Michelin Bib Gourmand since 2012. You’ll find menus showcasing Scottish produce that isn’t tethered to its roots. The means incredible dishes with Scotland at their heart but enhanced by flavours from across the globe.

Forget what you think about Chinese food. Amber Regent is all about fresh produce, with dishes cooked in their traditional Cantonese style. An emphasis on seafood and shellfish, creates the perfect fusion of Scottish produce and Cantonese flavours. A recent refurb has seen a new lease of life injected into this long-term Glasgow favourite.

A warming and relaxed dining experience – it’s the sort of place you want to spend an evening when it’s biting outside. Their cosy dining area offers traditional Scottish ambiance with a touch of luxury; quite in keeping with the beautiful dishes that come out of the kitchen.

A much loved resident of Alexandra Parade, Celino’s Italian Deli Café was established in 1982. A family run business, Celino’s offers ‘tutto per tutti’ (everything for everyone). They recently opened a second unit in the west end but the Dennistoun location will always be Glasgow’s favourite… well, I Love Glasgow’s favourite at least.

When you sharpen your knives in the culinary world under the Roux brothers and become head chef at Le Gavroche in your mid-twenties, it means you have some serious talent. This isn’t one of those name above the door, pop in twice a year to sign some books kind of deal either. Brian is on-hand to oversee each dish that leaves his kitchen.

Owned and operated by husband and wife team, John and Gillian Quigley. The result is a warm and welcoming vibe with wonderful classic dishes coming out of the kitchen. Vegans get their very own tasting menu here – six courses of guilt-free indulgence that sets Red Onion apart from many other vegan friendly restaurants.

Succeeding where Gordon Ramsey fell flat on his arse, and proving that Glaswegian’s have a more refined palate than naysayers give us credit for. Oozing character, the bistro at Hotel Du Vin can make even a quick lunch seem like a special dining experience.

Cosy seems to be the buzzword for describing Number 16 but it’s so much more than just a comfortable dining environment. The food that comes out of their kitchen is incredibly accomplished, with the desserts being especially impressive. It’s the kind of restaurant that people fall madly in love with.

Mother India has carved out an enviable reputation in one of the most competitive culinary markets in Glasgow. Known for their hearty portions and warm service… not to mention their famous spiced haddock starter. This is an institution of spice in Britain’s Curry Capital.

When the rich and famous visit Glasgow, they’ll inevitably be found staying at the Blythswood Hotel. It’s a place of luxury and, of course, that is evident throughout their menu. Whether it’s a fancy afternoon tea, or a beautiful roast dinner with all the trimmings – they simply don’t do things by halves at the Blythswood.

Home of Glasgow’s filthiest and most outrageous scran. From their infamous Durty burger, to Irn-Bru pulled pork, insane dogs and poutine that would make a Canadian weep with happiness. Their #NotForEveryone slogan may ring true for those who prefer fine dining, but when you simply want to stuff your face with delicious grub, then Bloc+ is where it’s at!

The calling card of any good Vietnamese restaurant is their Pho (pronounced “fuh”, not “foe”) and the Hanoi Bike Shop certainly don’t disappoint on this front. The enticing aromas that waft through this charming old mews cottage, will transport you to the bustling backstreets of Hanoi Old Quarter.

This fabulous neighbourhood bistro serves up accomplished plates of food, in a relaxed dining environment. For those not lucky enough to live within strolling distance, it’s definitely worth the journey along Crow Road to enjoy some fine cooking. Expect a menu packed with crowd pleasers and quality produce.

A little off the beaten track, this family run restaurant is known for hearty portions, homemade food and towering desserts. Finishing three courses at the Black Sheep Bistro is somewhat of a feat in itself. Go hungry and you definitely won’t leave disappointed. You may, however, need rolled out of the door.

The famous Cafe Gandolfi offers a little bit of everything, from chilled breakfasts, to bustling lunch services, wine dinners and whole lot in between. A Merchant City stalwart, Cafe Gandolfi has been a trendsetter for many decades and has rightly become name synonymous with Glasgow dining.

Quirky and eclectic with a bit of Glasgow swagger. There’s passion in the cooking at Guy’s and the vastly varied menu covers everything from steak pie, to ravioli, and even sushi! Guy’s cuisine clearly isn’t anchored in any particular port and you get the impression that this is simply the food that Mr. Cowan loves to eat himself. Which can only be a good thing, as he’s clearly a man who knows his grub.

Viewers of the Great British Menu will be familiar with Jacqueline O’Donnell, one half of The Sisters pairing. This family duo have been running a couple of Glasgow restaurants for over a decade and their inviting venues are real west end favourites. The Kelvingrove branch is perfectly located for a bite to eat before heading to The Hydro for a gig, or over to the Finnieston strip for a few cocktails.

Even if you’re in a hurry, you should still be able to enjoy a mouthwatering meal on the go. Chips and gravy out of the City Bakeries used to be the most elite lunch going but Glasgow’s takeaway offering has come a long way since then.
Read more
Food & Drink

Whether you have a favourite treat that you always seek out or will happily sink your sweet tooth into anything that’s a little bit naughty, these sugar-high hits will give you the fix that you’re chasing.
Read more
Food & Drink

Forget flights, passport woes, and big airport queues - Glasgow’s best beer garden is getting a transformation this summer and it’s the only place you need to be… introducing the Brel Beach Club!
Read more
Food & Drink

Sometimes you have to venture off of the beaten...
Read more
Best of Glasgow

I Love Glasgow is an independent digital lifestyle and cultural brand helping you to discover the best of our city on social and on the street.

Even if you’re in a hurry, you should still be able to enjoy a mouthwatering meal on the go. Chips and gravy out of the City Bakeries used to be the most elite lunch going but Glasgow’s takeaway offering has come a long way since then.

Whether you have a favourite treat that you always seek out or will happily sink your sweet tooth into anything that’s a little bit naughty, these sugar-high hits will give you the fix that you’re chasing.

Forget flights, passport woes, and big airport queues - Glasgow’s best beer garden is getting a transformation this summer and it’s the only place you need to be… introducing the Brel Beach Club!